Our water conditioners have been supplied to the commercial industry for over 15 years. Easy to install they offer years of care free maintenance without the use of chemicals. 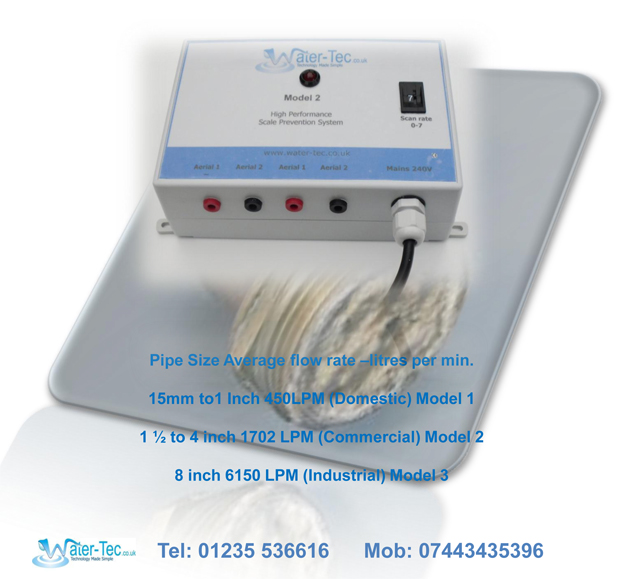 Hard water causes scaling, which is the precipitation of minerals to form a deposit called lime scale. Scale can clog pipes and decrease the life of appliances such as kettles, dishwashers, washing machines & clog and ruin water heaters. Similarly the insoluble salts that get left behind from using regular shampoo in hard water tend to leave hair rougher and harder to detangle. In industry, hard water contributes to scaling in boilers, cooling towers and other industrial equipment. In these industrial settings, water hardness must be constantly monitored to avoid costly breakdowns.

Box-shaped and needle-like are the most frequent type of crystal. The relative amounts of the different types of crystals is variable and can be altered by changing the balance of minerals, the temperature and other factors in the water. If the box-shaped crystals predominate then a hard scale will develop, but if the crystals are mainly needle-shaped either a soft scale forms or the crystals remain suspended in the water.

As the water flows through the coiled aerials which are wrapped around the pipe-work where the WT-Water Conditioner is fitted. The conditioner encourages the formation of many miniscule needle-shaped, rather than box-shaped, crystals.

The needle-shaped crystals remain suspended in the water as it flows though the pipes and appliances or settles out to form a soft scale if the water is stored or dries. The soft scale can be easily cleaned or wiped away.